Fifteen yeas ago today the United States endured the worst attack on U.S. soil ever. Today our hearts go out to the survivors and the families and friends of those who died in the attack.  May the years soften the heartache, and time lessen the ache. 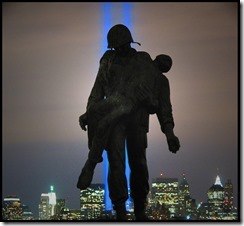 Soon after the attack, our country pulled together. Pride in our county and in our first responders filled our hearts. A few weeks later, police and fire fighter costumes were huge sellers for Halloween. We united in pride and determination. I thought the country had finally grown up.

Fifteen years later, a major presidential candidate is running a campaign promising to make America great again. Damn it! We ARE great. We always have been. Do we have problems? Definitely. Huge issues to deal with? Yes. Are there divisions among our citizens that are pulling us apart? Unfortunately yes. Ratings (money) hungry media and politicians of all levels looking to use our differences for their own agenda (money and power) have contributed to the problem. So yes, we have a lot to do, but that doesn’t lessen the fact that our ability to speak our minds in public is an indication of the greatness of our country. We are free. We are by and large safe. We accept our differences more than most countries.

We are a nation of explorers, of heroes, of people who were strong enough to weather all the wars and issues we’ve been faced with: revolution, civil war, slavery, industrialization, foreign wars, civil rights, terrorist attacks.

We need to rise above all those who want to use our fears and frustrations for their own betterment. No matter the race, religion, lifestyle, or political inclination let us treat each other with, if not friendship, at least with respect.