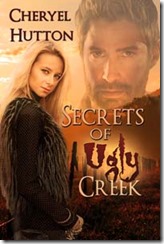 Come on in and have a good time.

Madison Clark comes home to Ugly Creek, Tennessee to protect her hometown from a hard-line journalist who ruined the life of a senator—what she didn’t count on was falling for the enemy.
Madison Clark is a successful journalist who volunteers for an assignment in her hometown in order to protect the quirky little place from the likes of Gibson McFain. He’s a hard-line journalist and documentary maker who has made his reputation exposing secrets. Ugly Creek has more than its share of secrets, and she knows revealing them would threaten the town’s way of life.
Gibson “Mac” McFain just wants to film a documentary in the little town, but Madison wants to make sure he doesn’t find out too much. Soon problems escalate when attacks begin against Mac and his crew. Madison seems to be as shocked as he is, but he can’t take any chances she might ruin what’s left of his career.
In spite of all this, their physical attraction pulls them together—and eventually they fall in love.
Neither trusts the other, but that doesn’t change the attraction they feel. It’s only a matter of time before they act on the desire, but will that mean sleeping with the enemy?

Now, let’s get this party started with Kool & the Gang: